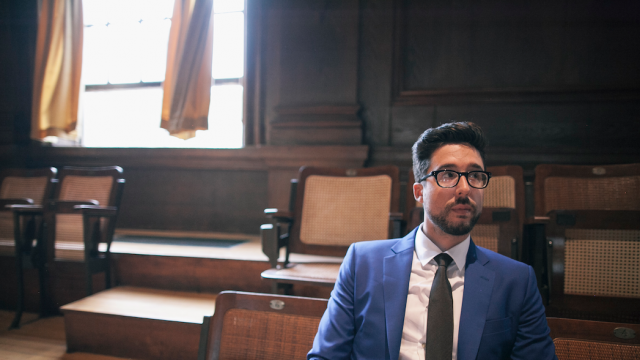 Aleszu Bajak is the director of data visualization at the Urban Institute. Previously, he was a senior data reporter on USA TODAY's data team, part of the newspaper's national investigative unit. He is a former Knight Science Journalism Fellow at M.I.T., was a founding senior writer at Undark magazine and founding editor of Esquire Classic, a project resuscitating the magazine's archives. His work has appeared in The New York Times, The Washington Post, M.I.T. Technology Review and Nature.

Before USA TODAY, he spent several years teaching and managing the graduate programs at Northeastern University's School of Journalism where he launched Storybench.org, an under the hood guide to digital and data storytelling, and served as innovation lead for the Co-Laboratory for Data Impact. He's also the founder of LatinAmericanScience.org, a resource for science news and opinion out of Latin America, and is a former producer of the radio show Science Friday.

For USA TODAY, I used hierarchical clustering to examine over 2.8 million tweets posted by members of Congress since 2010, showing Republicans and Democrats increasingly segregating into distinct rhetorical bubbles. With graphics journalist Ramon Padilla, we built an immersive presentation that leveraged animation, annotations and news events to illustrate the phenomenon. Code here.

When Trump started his speech before the Capitol riot, talk on Parler turned to civil war

My analysis of Parler on Jan. 6 found calls for civil war intensified on the right-leaning social media app as Donald Trump urged his followers to march on the Capitol. The article, When Trump started his speech before the Capitol riot, talk on Parler turned to civil war, was cited in Trump's second impeachment trial by Congresswoman Diana DeGette. When Derek Chauvin was found guilty for the murder of George Floyd, the verdict spread quickly on social media. We analyzed the volume and rhetoric of social media reactions to the conviction based on a panel of 250 influential accounts on the left and right. Read more at: "The words Americans used after Chauvin verdict reveal our political divide."

On May 14, 2020, Jeff Howe and I published "A Study Said Covid Wasn’t That Deadly. The Right Seized It." in The New York Times, which was based on our analysis of how ~900 preprint studies were shared on Twitter. I worked with the Times's Stuart Thompson and Yaryna Serkez to develop a timeline bubble plot and two network visualizations. For a year-long investigation into broken adoptions, I used Cox proportional hazards regression and survival analysis to identify risk factors among adoptees – such as children's race, age and mental health status – that were linked to statistically significant higher odds of returning to foster care. Full code here. To explore the weaponization of "critical race theory" for USA TODAY, I analyzed and visualized the phrase's evolution from conservative think tanks and blogs through right-wing media and into the mainstream. I built an interactive app and published a report with researchers at Northeastern University's Lazer Lab to explore the top links, domains and keywords extracted from 29 million tweets related to Covid-19 shared between January 1st and September 30th, 2020 by over half a million Americans for whom we had demographic information such as age, state of residence and political party registration. Ahead of the 2020 decennial census, I wrote, designed and managed an ambitious project for Journalist’s Resource at Harvard’s Shorenstein Center that produced a set of downloadable and customizable national, state, regional and program-specific datasets and embeddable data visualizations on census-derived federally funded programs built for newsrooms across the country. Shoutouts to Tyler Machado, John Wihbey and Carmen Nobel for guidance and bottomless patience.

For Peruvian investigative news outlet OjoPúblico, I collected, geocoded and designed a map of Covid-19 clinical trials with Martin Frigaard. Where crude oil spills in the United States

With the Dakota Access Pipeline protests in North Dakota in full swing, I decided to highlight the actual risk of the pipeline rupturing together with just how pockmarked America's recent track record of spills is. The result, pubished in Undark, was an interactive map based on statistical analysis of federal data - complemented by several in-depth interviews and case studies - of the crude oil pipeline spills America has witnessed in the last decade. Methodology here. For Undark magazine, I built an interactive map showing two decades of deforestation in Nicaragua. The American South's vulnerability to Covid-19

For Undark, I built a series of maps highlighting the American South's vulnerability to the novel coronavirus pandemic. 
The risk of Covid-19 to children

To better communicate the risk Covid-19 poses in children, USA TODAY's Janie Haseman and I analyzed trends in pediatric flu and COVID hospitalizations, publishing How COVID-19 in kids compares to the flu, other viruses in children along with several graphics. Where patient and vaccine data goes

As the Covid-19 vaccine rolled out, I worked with Janet Loehrke to illustrate the complex network of state and federal systems that data on patients and vaccine shipments flowed through. My analysis of gender and bias in media coverage of the 2020 Democratic candidates, a collaboration with Northeastern student Alex Frandsen, was picked up by CNN, The New York Times, The Washington Post and more. Negativity on the campaign trail

With Floris Wu, I published a story at Roll Call exploring the sentiment of politicians on Twitter in the lead-up to the 2018 midterms. I've used Principal Component Analysis and other NLP techniques in my research at Northeastern's School of Journalism. For Esquire, I compared the value generated by Martin Scorcese's use of two different actors. Far from the fairy tale: Broken adoptions shatter promises to 66,000 kids in the US

How many adoptions fail and why? Here’s what the numbers tell us.


When Trump started his speech before the Capitol riot, talk on Parler turned to civil war 
'Hope' is out, 'fight' is in: Does tweeting divide Congress, or simply echo its divisions?

Another Marjorie Taylor Greene or AOC? We found Congress' next potential lightning rods.


Could we save lives by assigning each American a place in line for vaccines?

Michigan bet big on mass vaccine events for COVID-19. It didn’t work out as hoped.

Did America’s schools open safely? We crunched the latest data on COVID-19 and kids.

How COVID-19 in kids compares to the flu, other viruses in children

COVID and kids: How the omicron surge is impacting child hospitalizations, school safety

'Just not equal at all': Vaccine rollout in Chicago a microcosm of racial disparities nationwide

Her Brain Tormented Her, and Doctors Could Not Understand Why

Someone Is Tracking How Much You Vape on Twitter

What should Peru do to improve its science?

Science in Colombia on the cusp of change Chile’s chance to embrace science for the twenty-first century

Chile’s Scientists Take to the Streets

U.S. Assesses Virus of the Caribbean

Abundant natural gas may do little to reduce U.S. emissions

Why Trump's talking points become ours. Like it or not.

For Bordeaux’s Winemakers, Rising Temperatures Bring a Reckoning. Republished at The Atlantic as Global Warming Could Throw France’s Wine-Making Traditions Into Chaos.

Climate Data for the Masses

To Feed Energy Demand, There Will Be Sprawl

For the Obama Administration, the Clean Coal Dream Lives On

Can Donald Trump Dismantle the EPA? It’s Been Tried Before

Hillary Clinton and the Cultural Biases of Being ‘Presidential’

Micro-targeting and the 2016 Election

Playing Politics With Zika — and the Public’s Health

The Blind Pursuit of Mosquito Control

For the U.S., a More Worrisome Zika Vector?

For Venezuela's Zika Woes, Some Tylenol

While Congress Dithered, the Zika Virus Flourished in Puerto Rico

Browse all my stories for Undark here.

Will Embryonic Stem Cells Ever Cure Anything?

Biden and Warren Were the Top Post-Debate Targets on Twitter

How to use hierarchical cluster analysis on time series data

How Quartz is bringing storytelling and interactive design to sponsored content

Revolutionizing the work of newsrooms by making citizen videos searchable

How to organize your data for various charts and graphs

The Dangerous Belief That Extreme Technology Will Fix Climate Change Quiz: Which Tech Titan said it? Catcher in the fog

The world is awash in pesticides. Does it have to be?

In Water We Trust

What if a hurricane like Sandy hit your brewery?

Should You Be Worried About the BPA in Your Beer Can?

Unlocking the Science of Hop Aromas

Stemming the Rise of Barley Diseases: How Nasty Fungal Infections Could Affect Our Grains and Beer

Darwin, Neruda and Me

The future of Latin American science

A year later, the effects of a volcanic eruption still plague Patagonia

A farm runs on homemade biodiesel in Argentina

How can we fight the rise of deadly superbugs?

Back in Colombia – and on the Gringo Trail

Colombian coffee at the crossroads

Can the world’s growing appetite for unique coffee save Brazil’s specialty coffee farms?

DATA DAYS CLE presentation "How to analyze social media data: Separating signal from noise to understand how narratives are being shaped and who is shaping them," Fall, 2022.

So you want to be a data journalist?, CUNY Graduate School of Journalism, 2016

Aleszu Bajak is the director of data visualization at the Urban Institute. Previously, he was a senior data reporter on USA TODAY's data team, part of the newspaper's national investigative unit. He is a former Knight Science Journalism Fellow at M.I.T., was a founding senior writer at Undark magazine and founding editor of Esquire Classic, a project resuscitating the magazine's archives. His work has appeared in The New York Times, The Washington Post, M.I.T. Technology Review and Nature.

Before USA TODAY, he spent several years teaching and managing the graduate programs at Northeastern University's School of Journalism where he launched Storybench.org, an under the hood guide to digital and data storytelling and was innovation lead for the Co-Laboratory for Data Impact. He's also the founder of LatinAmericanScience.org, a resource for science news and opinion out of Latin America, which he started in 2012 in Argentina.

In 2013, Aleszu was awarded a Knight Science Journalism Fellowship at M.I.T. where he explored the interface between journalists, designers and developers between visits to the Muddy Charles. Since then, he has taught journalism courses and led workshops at the Nieman Foundation for Journalism at Harvard, Brandeis University, Harvard Extension School, Boston University's Storytelling with Data bootcamp, and O'Reilly Media. He has spoken at conferences in Seoul, Toulouse, San Antonio, Bogotá and Querétaro.

He has been a freelance reporter in Latin America, a producer for the public radio show Science Friday, and once upon a time worked in the gene therapy department at Weill Cornell. His writing has appeared in The New York Times, The Washington Post, The Boston Globe Magazine, M.I.T. Technology Review, OjoPúblico, The Huffington Post, Esquire, Nature, Science, and Guernica, among other outlets. He grew up in New Jersey, Germany and Colombia and has lived in Chile, Peru and Argentina. He can be reached at firstname lastname at gmail.com.